The Lying Hounds in the Mainstream Media

The mainstream media, particularly those here in New Zealand, seem to get worse by the day. They have abandoned any pretence of objectivity, politically impartiality and journalist integrity, and have become blatant propagandists for the governments they support and their establishment fellow-travellers. Actually, propaganda is probably too mild a term for what they churn out - that suggests a subtlety and a careful nurturing of the most favourable facts - but much of what the media publish is downright lies.
One of the very worst offenders is the New Zealand media outlet, Newshub. If you had seen the headline below on the Newshub site a couple of days ago you'd have thought that New Zealand had narrowly avoided an armed coup. 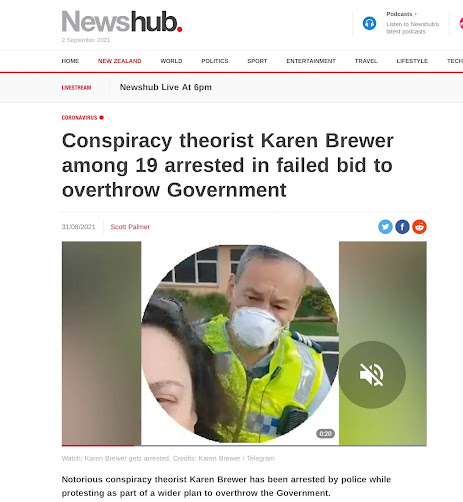 In fact, if you read all the way through the story it became apparent (despite Newshub's attempt to obscure the facts) that just one mentally unstable woman had been arrested in Auckland for protesting against the latest Covid-19 lockdown. The "19 arrested" referred to the number detained by police around the country for breaching lockdown for any reason. A conspiracy to overthrown the government? Only in the febrile imagination of the Newshub reporter.
A later headline dropped the reference to "failed bid to overthrow Government" but still referred to a "chilling threat". However, they made the mistake of showing the woman in question wearing a colander on her head - as you can see below. A chilling threat to New Zealand democracy, indeed! Clearly, someone at Newhub was sufficiently self-aware to have pulled the ridiculous headline, but the story that remained on the website was just as much a bucket of horse manure as the first version. It quoted a University of Waikato Professor of Law warning that we need to take the threat of terrorism from the "anti-vax movement" seriously and equating anyone who might oppose compulsory vaccination with the Christchurch mosque shooter. Have these people no shame? 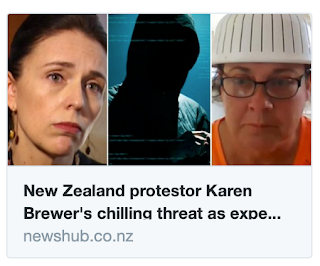 Karl du Fresne, the former editor of The Dominion newspaper and one of New Zealand's most respected journalists, has written that the propaganda in the New Zealand mainstream media is not surprising because the Ardern Government has created a $55 million so-called Public Interest Journalism Fund to "support New Zealand’s media to continue to produce stories that keep New Zealanders informed and engaged and support a healthy democracy" the Government likes. The money comes with blatant political strings attached, including supporting the Government's agenda on Maori separatism, countering so-called Covid-19 "misinformation" and various other propaganda conditions. Du Fresne has dubbed the taxpayer-funded propaganda programme the "Pravda Project", undoubtedly because the initiative is well on its way to achieving the aims of that Soviet journal - unalloyed support for the governing party and its doctrine.
The rest of the world has more than its share of establishment cheerleaders amongst the mainstream media - the venerable New York Times was so wrong-footed by the election of Trump in 2016 that its publisher issued a mea culpa admitting to its bias and promising to do better - and everyone knows where CNN, MSNBC and FoxNews stand politically, but few of them resort to such blatant lying as the media here.
I no longer subscribe to any mainstream media publications in New Zealand, having long since voted with my wallet on where I get my news (I subscribe to a number of international news services and online magazines) so I cannot do any more than try to ignore the excrement that they egest. But I urge anyone reading this to cancel your subscription, if you still have one. No doubt the Ardern Government's propaganda fund will keep them in their nefarious business for a while longer, but the fewer subscribers they have, the more pressure they will be under to change their ways.
UPDATE: Lindsay Mitchell notices a trend in departures from the MagicTalk radio network. With the incentive of the Ardern Government’s Pravda fund, it is hardly surprising NZ media outlets are quietly getting rid of any dissenting voices.
Posted by Kiwiwit at 8:35 PM

Combatant in the culture wars

Malo periculosam, libertatem quam quietam servitutem (I prefer the tumult of liberty to the quiet of servitude) ~ Thomas Jefferson

Blogs and Publications I Read