I have just returned from a few weeks in India. It was my first visit to the subcontinent and it was an amazing experience. India is, to use a hackneyed phrase, a country of contrasts. I saw some of the most beautiful scenery I have seen anywhere (the Thar desert in particular), delved into the histories of what were some of the most advanced civilisations in the world, and met some amazing people from all levels of Indian society. But India is also, to borrow a descriptive term from Mr Trump, a shithole - somewhat literally (in view of the amount of animal and human excrement everywhere) as well as figuratively. Fortunately for Indians, their circumstances are rapidly improving as they have ditched the statism and socialist economics of the post-Independence period to adopt, in recent decades, free markets and deregulation. They have a long way to go but as with every experiment of its type, they are realising the fruits of capitalism. Extreme poverty has reduced from nearly 60% of the population in the 1970s to around 20% today, despite the population roughly doubling over that period. In fact, so successful has been India's economic revolution been that some of its biggest problems today are those associated with advanced economies - traffic congestion, air pollution and the rising cost of housing.

Singapore is a place that I have visited numerous times since the 1980s and over that time I have seen it progress from an ambitious but relatively poor city state to the one of the most prosperous countries in the world. When I first went there, Singapore's GDP per capita was 40% below New Zealand's, its dollar was worth about one-fifth of ours, there were still slum areas outside the central city, and the water wasn't safe to drink. Now its GDP per capita is 25% higher than ours, its dollar is more valuable, the entire island is clean and green and modern, and Singaporeans pride themselves on having drinking water equivalent to Norway's. It is not exactly a paragon of democracy, with the ruling People's Action Party having been in power since self-government was granted by the British in 1959 and two of the three prime ministers since then being Lee Kwan Yew and his son Lee Hsien Loong. However, Singaporeans seem well-satisfied with their political leadership and choose not to concern themselves with politics but rather get on with managing their own (increasingly prosperous) lives.

New Zealanders, by contrast, seem obsessed with politics and expect the government to micro-manage every aspect of their lives and solve every problem that confronts them. We imagine ourselves to be rugged individualists with a can-do attitude, but the reality is that we are like infants in our expectations that Nanny State will take care of us. Indians and Singaporeans alike would regard this dependency as pathetic and unbecoming. The more I travel the world, the more I realise that New Zealanders are complacent and far too self-satisfied. Our economic trajectory is not good - we continue to fall behind comparative nations in income per capita and productivity, as the following graphs show. 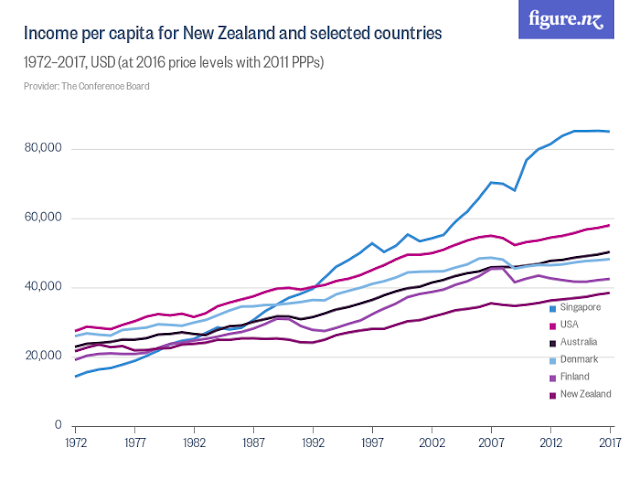 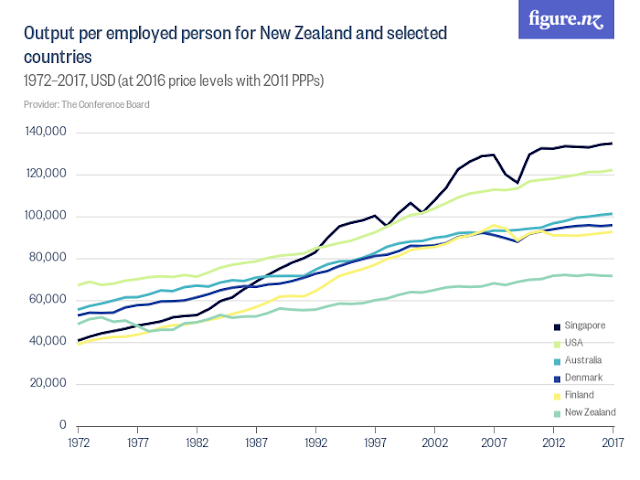 The graphs show that the decline in our relative economic position is a long and intractable trend. Our GDP growth has averaged around 2.5% in recent decades, whereas India and China have averaged 7.5% and 9.5% respectively. There is no reason to expect these trends won't continue and the ultimate result is that China will have a higher GDP per capita than New Zealand by about 2040 and India well before the end of this century. Is this what New Zealanders really want?

I wouldn't want to live in India today and while Singapore has its appeal, New Zealand still beats it on lifestyle. But the lifestyle of a nation is in large part a factor of its relative wealth - in other words, shitholes are such because they are poor. What is our lifestyle going to be like when we are one of the poorest countries on Earth, rather than one of the wealthier ones? It is a sobering thought.
Posted by Kiwiwit at 9:27 PM No comments:

Malo periculosam, libertatem quam quietam servitutem (I prefer the tumult of liberty to the quiet of servitude) ~ Thomas Jefferson

Blogs and Publications I Read